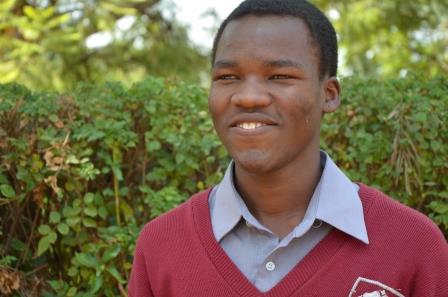 Herdsboy’s trek from despair to A-student

Lomilio Emejen’s life story reads like fiction. Born and raised in the pastoral area of Turkana West, Lomilio has struggled to get to where he is through sacrifice and self-determination.

Lomilio, a student at Lenana School, is the only child to have set foot in a classroom in his family of ten siblings, thanks to a well-wisher who came to his rescue after all doors were closed.
"My father is a nomadic pastoralist and we kept moving from one place to another in search of pasture and water for our heads of cattle and camels," he said.

Despite the odds, he sat his Kenya Certificate of Primary Education (KCPE) exams in 2009 and garnered 384 marks out of a possible 500 marks securing a place in a national school.
He was also the best student in the division and the second best in the district and his spirits were high that he had made a good bet to pursue education.
Lomilio joined a missionary sponsored primary school in Lokichogio. Here, he didn’t have to pay school fees or buy school uniform. During the day, he would stay on in school and in the evening he would scavenge for food at a United Nations dumpsite for close to seven years. It was only while in Standard Eight that he was placed under the school-feeding programme.
But the day he received his admission letter, reality dawned on him that he would not transit to high school due to lack of school fees.
"This was one of my lowest points in life. I had worked extremely hard despite the many challenges I faced and after all that, all my efforts came to naught," said Lomilio.
Teachers from his primary school traced Lomilio two months after he dropped out and convinced him to go back to school and repeat Standard Eight as they sought funding. He accepted and went back to school in the second term.
He sat his final exams and his performance was even better, scoring 399 out of a possible 500 which secured him a place at Lenana School.
Lomilio was the best candidate in the wider Turkana County. Again, the challenge of raising school fees emerged.

"I began approaching well wishers in the area to contribute towards my education and luckily, I met a man working with World Food Programme who promised to cater for my first term fees through contributions from his fellow workmates. Through their generosity, I reported to school last year," said an elated Lomilio.

After his first term in school, Lomilio’s benefactor was unable to raise his school fees for the second term and that is when Lomilio got in touch with Edumed Trust, a Kenya Community Development Foundation partner in Turkana.
He applied for a scholarship and was successful.
They further extended an education grant provided by Chandaria Foundation through the trust for his fees for the next four years.
"A needy child is as good as any other so long as they are given an opportunity. That is why the foundation is committed with other partners to help those intelligent students who lack fees to pursue their dreams," said Janet Mawiyoo, the foundation’s executive officer.
Lomilio is filled with gratitude to his benefactors and says it is due to their intervention that he is now more settled in school.

"I have scored straight A’s in the period I have been in Lenana School and I am working hard to take full advantage of the opportunity accorded to me," says Lomilio.