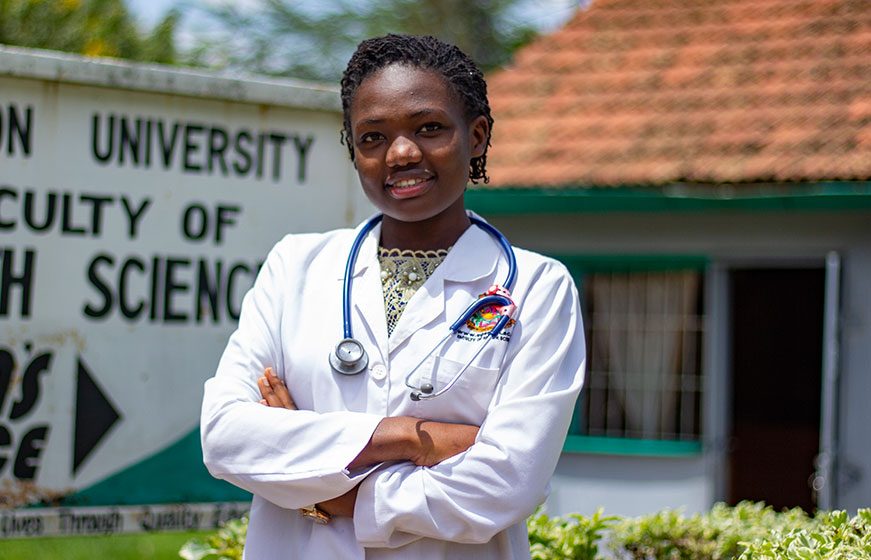 Making it to Medical School against All Odds

When Mackline Nyanchama’s grandmother passed on, her death was blamed on witchcraft. But the young girl was not convinced, and the tragic incident disturbed her for a long time, “what if it was something treatable?” she kept asking herself with no clear answer in sight.

Long after her grandmother was buried, neighbours and relatives continued to die in her village and the same questions kept flashing in her mind. With no one to turn to for an answer, a thought came to her mind that she could probably help the situation in the near future.

“I wanted to be part of the team to help my community and the only way of doing that was by going to a medical school and becoming a doctor,” says the 23-year-old girl, now a fourth-year medical student at Egerton University Medical School.

Her journey to medical school started at Greenhill Academy in Kisii County, where she clinched second position in her final exams in the school: “My pursuit for education at Greenhill was not smooth sailing since I was always home most of the time for lack of fees. At some point my mother decided to withdraw me from the institution, but when the school Director noticed my capabilities, he offered me a scholarship which saw me through primary school,” says the fifth born in a family of seven children, four boys and three girls.

Her outstanding performance at Greenhill Academy earned her a chance at Starehe Girls – a prominent high school in the capital city, Nairobi, which offers education for free or at a reduced tuition fee rate for academically bright children from poor backgrounds. During her first year of study, she was selected to join the Global Give Back Circle (GGBC), a programme designed to help at-risk girls realize their leadership potential and become change-makers, while gaining the skills needed to secure a good job. The programme aims to assist beneficiaries to break the cycle of poverty and lift up their families and communities.

“GGBC took us to workshops and trained us on giving back to the society. We were also guided on being focused and given tips on careers then linked to a mentor,” says the girl from Ibecho Village in Kisii County, whose school fees was also settled by GGBC. The programme, thanks to the generous support of the American people, is supported through USAID and the private sector.

Her mentor, Wilkista Keiza from United States of America, was a good friend who inspired her deeply: “We talked about school and social life, her job and many other things. She encouraged me on many fronts and always strived to open up academic and social opportunities for me. I valued our relationship because, for once, there was someone in my life that I would openly share my experiences, fears and things that I would not ordinarily be comfortable telling my parents,” says Mackline of the American, who is older than her.

While at Starehe Girls, she was distinct for her academic and leadership skills – attributes which saw her elevated from leadership positions of ordinary Prefect to Deputy School Captain: “I had made commitments to give back to society when I signed up for GGBC, and so I was ready and willing to help other students in areas they were not as perfect as me,” says Mackline.

Ahead of the Form Four national examinations, she easily opted for medicine as her preferred area of study at the university. And when the results came through, she had indeed registered sterling results and was certain she was destined to become a medical doctor. But when she received her admission letter to the university, her heart sunk. She had been selected to study Actuarial Science at Egerton University, a course she knew nothing about.

“I was so disappointed when I got my admission letter because I had already set my mind to study medicine. My dad too was disappointed, but my mum cared less. What mattered to her was the fact that I had secured admission to university,” narrates Mackline.

Undetermined, no sooner had Mackline reported at Egerton than she applied to reverse her course from Actuarial Science to Medicine, which was granted without any hitches: “I knew right from primary school that I would become a doctor. People’s dreams change with time, but I had no reason to change mine because it was attainable,” Mackline affirms confidently.

GGBC has in the meantime continued to support Mackline’s university education, with regard to tuition fee and her upkeep: “I have attended life skills training sessions on financial literacy, reproductive health, decision making, as well as job awareness,” says the jovial girl, observing she has continued to give back to society, with special focus to malnutrition in children.

Mackline explains she comes across many kids in hospital wards suffering from other diseases as a result of severe acute malnutrition and who have only been given medicine to cure their conditions but without knowledge on how to avoid such diseases. Her duty has therefore been to educate mothers on the need for good diet for their children.

“There is nothing more fulfilling like helping another person even in a small way. The greatest investment to make is in people because it comes back in a big way,” says Mackline, who wants to pursue Public Health after graduation. She hopes to eventually specialize in pediatric health, in order to champion community programmes to help people avoid infectious diseases.