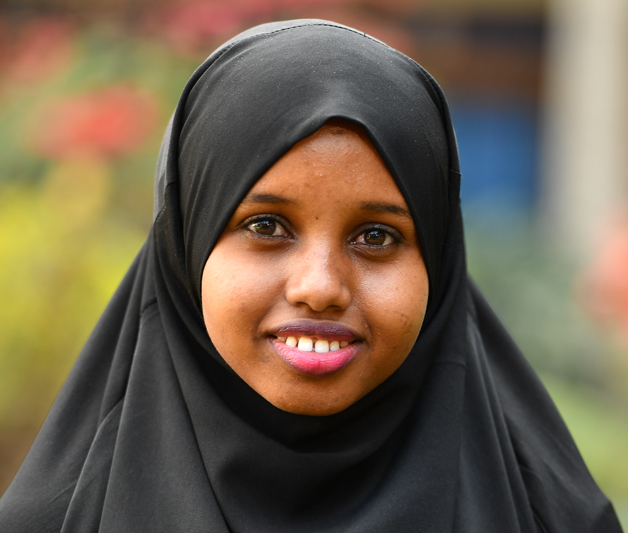 Mandeq Adowo was brought up Wajir, North region of Kenya, a place she remembers as dry and dusty. When she was in standard three, her parents transferred her from a public school to another school where they believed that she could get quality education.

“My mother was and still is very forward thinking,” she says. “She is not learned having lacked an opportunity to go to school but is a great champion of education partly why I was moved schools because she wanted a strong education foundation for me. Whenever we are together, she does not miss a chance to encourage me and my brother to be the best versions of ourselves. She is my biggest cheerleader.”

Mandeq exceled in her studies through her primary school, and she received a calling letter to join Alliance Girls’ High School, a public national school in Kenya. But there were some reservations especially from her parents. The school having been founded by Christian missionaries holds Christian values in high esteem and they were concerned that she would lose her faith. Reluctantly, they let her join Alliance Girls’ High School.

“It was really difficult for the first two years because I came from a very different environment where we were all largely of the same faith,” She says. “The culture shock impacted my studies, and I was not doing well in class. But my mother kept encouraging me. Eventually things got better after adjusting. I scored an A in my final exams. Alliance, apart from giving me the best education and socialization, made me see that my faith was a matter of the heart. It also made me respect Christianity,” she says.

Looking back, she is grateful that she had been able to get a good education despite her background. “I was sponsored by UNICEF for my secondary education who later introduced me to Kenya Community Development Foundation (KCDF) who are implementing the girl child programme Global Give Back Circle (GGBC). I applied for a scholarship opportunity to pursue my dream career, Medicine. The programme has not only catered for all my school fees right up to now that I am in my sixth year, but also attached me to a mentor and offered some key life skills training making me a holistic student.”

Coming from a community that attaches little value to the girl child, going to school and pursuing a degree in medicine is a big deal. She is an inspiration to other girls in her community and to her siblings. “I did not to get married soon, like most girls in Wajir because I want to show my siblings that one can first pursue other things, like education. I want to make sure that they all get an education and better their lives,” Mandeq quips.

Having seen the value and the limitlessness of education, Mandeq hopes to change the tune of her society and empower as many girls as she can. She belongs to a group called Wajir Enforcement Educational Group that give talks and mentors young girls on education and life issues.

“This group is a powerful forum in that the lives of young girls are positively transformed by encouraging them to change their perception on education and life in general,” she offers.