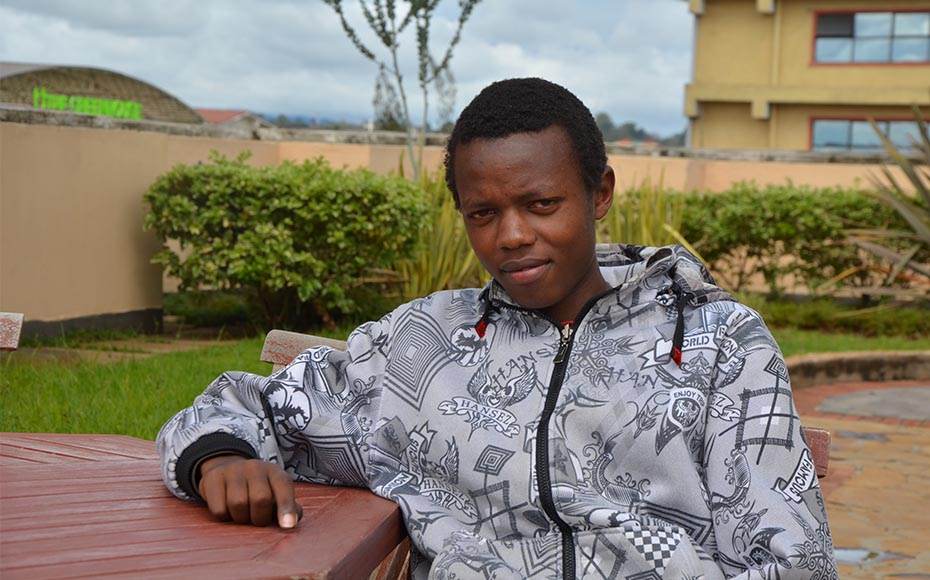 He remembers the drama that surrounded his father bringing home a second wife and his mother packing up her belongings and leaving with the three of them. They moved from Limuru to Kayole. He changed schools to a public school. His mother started operating small businesses to see them through school. “She started selling shoes, which did not do very well,” he says, “she then started selling porridge. My life was kind of all over the place. It was around the time I was joining form one and it was tough. She sold porridge for a whole year. I don’t know how she even made it, with three children, one in university, my brother, but he had to fend for himself. Luckily, he got a scholarship with Equity Bank, so they gave him a job, and he could pay for his studies.”

When asked what kind of a teenager he was, he says, “The kind that does not believe in men.” He passed well enough to be called to Kiambu High School, but his mother could not afford school fees, so she found an alternative - Githiga High School. The fees there was also expensive, so they explored the option for a school next door. “To me, this was bad because my high school was right opposite my primary school, Bondeni Primary School.” He says. “I was not interested. I told my mother, ‘I preferred to rather stay at home work for some time, get some money then join form one the following year.” Luckily, through contacts in his former primary school, they got linked to KCDF who, under the Chandaria Foundation, in association with Global Educational Fund, offered him a scholarship.

He says, “They paid for half my fees in form one up to form four, my mother struggled with the other half. At the end of form three, I had a large fee balance and she could not pay for it. So, she approached Global Educational Fund who paid off the balance.” He scored a B+ in his KCSE and was later admitted to Maseno University to study Computer Science. “My mother leaving my father forced me into a man earlier than I thought I would have to” he says, “It made me mature and grow up fast.” He is now playing basketball and taking it seriously. He wants to make a career out of it. But in the meantime, as a plan B, he is going to work hard and complete his studies and become a Software Engineer. His life has been about being supported by people, but his mother leaving his father and growing up fatherless seems to take a big space in his life. “The biggest lesson I have learnt so far is about trust and faith. Having faith in yourself and the people around you. After the separation from my father and realizing that even the closest people can turn away from you, I have shut out people, and not in a good way. I went through my high school days not trusting anyone, I kept to myself and refused to let anyone in. I am now working on changing that.”