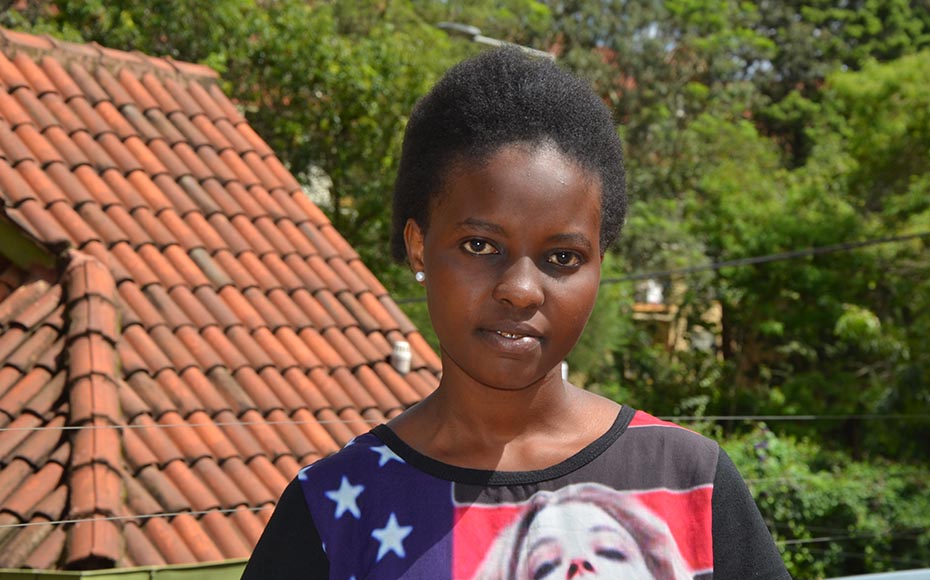 She says very little. Speaks in monosyllables. She sits at the edge of her seat, like a frightened deer. No eye contact. At some point she will cry, a soundless cry. Her name is the first story, all Christian names. “My father is Jonathan Kimandi,” she whispers. “I don’t use his name because I was brought up by my mother. But I keep contact with him.” She remembers growing up in Taita Taveta, a place called California. “It was cold,” she mumbles staring at the floor. She started school there, but in class eight she transferred to a school in Mtito Andei. For her high school, she went to St. Joseph Girls Secondary School, in Kibwezi. She managed to score a B and was called to attend Mt. Kenya University where unfortunately due to financial constraints, she has not yet managed to join.

“I received support from KCDF through the Chandaria education scholarship fund for my high school education,” she says, “but now I do not have someone to sponsor me through my university since the scholarship caters for secondary school education only. In the meantime, I am working in a farm in Athi River.” She is 19-years of age now. Her sister who is 17-years old, dropped out of school and works with her in the same farm. She says her ambition has always been to be a doctor but since she did not attain the necessary grades she intends to pursue medical laboratory sciences, the closest she can get to step in a hospital as a medic. That dream, as elusive as it may seem now, is rooted deeply in her childhood.

“When I was a child, my mother fell seriously ill,” she says, “I must have been five years old and my sister was three. We were only the three of us; me, my mother and my sister. Everyday an aunt would pass by to clean up and cook for my mother. We were so terrified that she would die. I felt so helpless.” She starts to sob. “I thought she was going to die then we would be left all alone. During this time, she was sick, she kept saying, ‘Patricia, if you were a doctor you would heal me, please read hard so that you become one.’ It was so painful to see my mother cry. I have never forgotten it and so being a doctor was always to be able to save my mother.” She still hopes to wear a white lab coat.