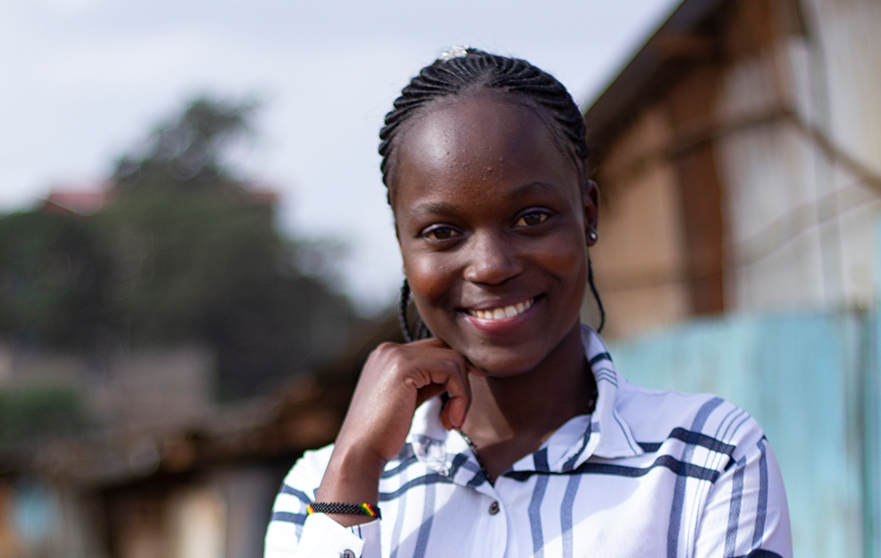 Joan Asena’s childhood was not particularly rosy, and her parents’ separation only made the situation worse. Her mother had to struggle to make ends meet for her and her younger brother. Employed as a casual house help, her source of income could not afford them decent livelihood. Joan had to complement her mother’s income by running a small kiosk business after school, selling charcoal and vegetables in Nairobi’s sprawling estate of Kangemi.

Amid the tough challenge of juggling between school and running the kiosk, Joan managed to complete her primary school education in 2013 and secured admission to secondary school far off in Kakamega County, Western Kenya. This time around lady luck smiled, but only for one year - thanks to the willingness of her father’s brother to pay tuition fee for the first year of her secondary school study. But since her mother could not sustain her upkeep in a boarding school, Joan relocated to Nairobi to proceed with her education in a day school.

Once in Nairobi, the old struggles re-emerged and intensified.  She had to wake up daily very early in the morning to prepare chapati and mandazi for sale before preparing for school. During this period, Joan also developed interest in the art of hairdressing to supplement her income from selling chapati and mandazi. In 2017, she sat for the Form Four Kenya national secondary examinations and despite her spirited efforts to complete studies notwithstanding, the final outcome was nothing to write home about.

Distraught and unsure of the direction in her life, she resignedly remained indoors for eight months, partly braiding people’s hair for a modest charge of Kes. 100 ($1) per customer: “I knew I wanted to go for some kind of formal training, but I could not figure out where money for such a training would come from, since I was now shouldering some of the household responsibilities including paying school fees for my younger brother and occasionally chipping in the house rent.” recounts the 19-year old jovial girl.

In September 2018, she opened up to her mother on the need to undertake a course in hairdressing and beauty, the mother accorded her the sweetest surprise. She not only gave her the nod to apply but paid upfront a sum of Kes. 20,000 ($200) she had saved, out of the required Kes. 28,500 ($285). Her journey to self reliance kicked off in earnest at St. Joseph’s the Worker Parish, where the church has a training centre which empowers youth with quality vocational skills at an affordable cost.

“I was happy to join the institute because I knew I was now destined to get a skills trade, which would open for me the world of diversifying my work,” says Joan, adding that when she joined St. Joseph’s, “I only knew how to braid lines but soon, I was able to learn ten other styles and this has enabled me to earn a good amount of money.”

Upon completion of the eight-month course in April 2019, Joan sat for a certificate course examination administered by the National Industrial Training Authority (NITA), a government certification institution. Although she is yet to graduate, the skills gained, and government certification acquired is proving handy as she is already eking a living fully out of hairdressing.

“After completing the course successfully, I joined my friends who own a salon where I attend to customers and get a daily payment, which is more than what I used to earn before the training. I am now able to comfortably pay for my needs and similarly pay for my brother’s tuition fee whilst helping my mother purchase food and other domestic needs.” says Joan gleefully.

Father Ponsiano Ngondwe, who serves as head of St. Joseph’s Parish Development Programme, observes the institution has been lucky enough to get support from Kenya Community Development Foundation (KCDF). “This partnership has helped the centre support many youths who would otherwise be out there in the streets with no means of livelihood.”

Through the Kibera Fund livelihoods programme, St. Joseph’s Parish received support from KCDF to initiate a project that sought to empower vulnerable youth in Kangemi slums through skills training and entrepreneurship. Through the project, 150 beneficiaries continue to benefit from technical skills in embroidery, hair & beauty as well as computer skills.

According to Joan’s hairdressing instructor at St. Joseph’s, Winnie Ketton, “Most students are from difficult backgrounds. Some dropped out of school due to lack of tuition fee and when they come here, we teach them to either embrace self-employment or seek employment. The hairdressing and beauty industry are growing, and I am sure they will not lack a job in the sector.”

Joan is doubtlessly one of the success stories of St. Joseph’s the Worker Parish. And the sky is not the limit for her, as she plans to open up her own salon to employ and light up the faces of many others.