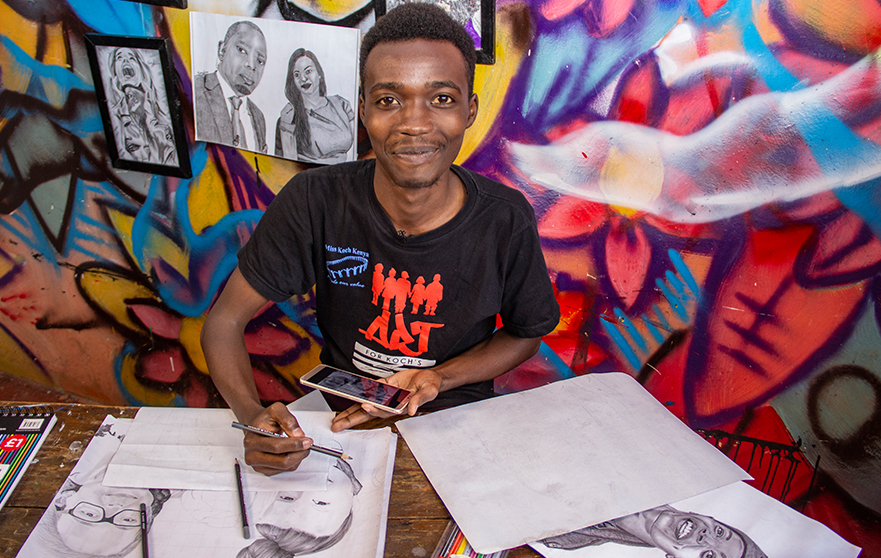 Nurturing Creative Skills in Youth as a Livelihood

The tale of Miss Koch Kenya, a youth empowerment organisation in one of Nairobi’s largest informal slums, Korogocho, mirrors the world-famous Beauty and the Beast film by Stephen Chbosky and co-produced by Walt Disney Pictures. In Chbosky’s notable screenplay, a beautiful village girl embarks on a journey to save her father from a beastly creature that has locked him in his dungeon – a mission similar to Miss Koch’s to rescue youth of Korogocho from the ugly pangs of hunger, poverty and despair.

In the instance of the “beastly” Korogocho, the fourth largest slum in Nairobi, where about 250,000 people living in squalor and at the risk of gang criminals, prostitution, drug addiction, and mental illness, Miss Koch is the symbol of rescue and hope. Started in 2001, Miss Koch Kenya - the abridged version of Miss Korogocho – largely featured beauty contests among girls in the slum area at its initial stages. MKK has since metamorphosed into a large entity focusing on the emancipation and empowerment of the girl child.

Miss Koch’s intervention area includes ending endemic socio-economic and political problems facing the residents of Korogocho, especially on insecurity and disempowerment of the girl child and young woman in society.

“Miss Koch has always placed great importance on youth, be it the empowerment of Korogocho youngsters, or those in neighbouring areas to provide them with academic support and skills training for self-employment,” says Kelvin Lugaye, Talents and Arts Entrepreneurship Programme Manager at Miss Koch.

The organisation runs four programmes on education and mentorship, sexual reproductive rights, human rights and governance; and talents and arts entrepreneurship. To achieve these goals, Miss Koch Kenya has been collaborating with several likeminded sponsors and partners, including KCDF.

The objective of the talents and entrepreneurship programme is to nurture the arts skills among youth as a way of them tapping into the skill not only as a form of livelihood, but as a way of expressing themselves creatively. The programme’s four components, according to Lugaye, include setting up of a creative hub, where youngsters are taught on different arts skills, business planning and how-to set-up their business so as to enable them to appreciate that their skills can generate them a sustainable income.

The programme also mentors these students by linking them up with people who are already in the industry, as well as offering them exposure to how the industry operates. Over the years, Miss Koch has helped hundreds of youth giving them skills by nurturing talent in disco jockeying (DJ), dancing, modelling, music, fine art, photography and film.

“We have supported 300 youth under the Creative Lab Sessions out of which 100 are in gainful employment,” says Lugaye, adding that, “The remaining number are undergoing internship and are still trying to find their footing in various places.”

Upon completing secondary school studies, one of the beneficiaries of the Talents and Entrepreneurship, Creative Hub Programme, 19-year old Emillian Ngare, secured admission to study plant mechanics in a mid-level college in Nairobi. But her mother, a single parent, could not afford tuition fee for the course.

Aware of her interest in fashion design, one of Emillian’s friends advised her to try her luck with Miss Koch. She however realised that by enrolling for fashion, she would be required to wear high heeled shoes – something she detested right from childhood. Emillian instead went for a disc jockey course and to her surprise, her mother had no objection but supported her move.

And so, in November 2018, Emillian’s journey as a DJ began in earnest after securing admission for the one-year course. She, however, nearly contemplated opting out when she noticed they were only two other ladies out of a class of 10. She thought she had made a mistake and was in the wrong class, but with time she received tremendous support.

Besides learning the bolts and nuts of disc jockeying, she now comfortably socialises with people: “I was never sociable, but the course has given me confidence. I am now able to read the mood of my audience and ensure they remain happy during my shows,” she shares.

“Just like the case of our other students, the course has succeeded in boosting Emillian’s self-esteem and confidence,” confirms Lugaye.

The entrepreneurship skills she learnt has also come in handy: “The skills I learnt can now enable me to put food on the table. I have been getting gigs through referrals and profiling myself on the internet,” says Emillian, whose graduation from the college comes just a few days shy from her 20th birthday. As Emillian settles in her newfound profession, she hungers to help other young girls become disc jockeys. She hopes to open her own school one day to achieve this goal.

Fleming Mithamo, another beneficiary of the Talents and Arts Entrepreneurship Programme, tried his hands on many things but his passion for fine art never gave him peace until he finally landed at Miss Koch Kenya.

When the 22-year old completed secondary education, he enrolled for a driving course but upon completion he opted to work as a baker. But soon Fleming got bored and left after two months. He again tried his luck as a guard, and that too did not click, and he downed his tools one and half months later.

All this while, memories came flashing his mind how, in class three, he discovered he was talented in drawing cartoons and always emerged the best in class. In fact, in the absence of his art teacher, he was the default teacher. He knew he had the talent to be a fine artist.

While working at the bakery, he spent his free time searching and consulting artists online. He then came across an artist who used to comment on his artwork. Soon they become friends, met and before long, he had been recommended and admitted at the Talents and Arts Entrepreneurship Programme as a student in September 2018.

Being in the programme, Fleming has learnt basic and practical skills of drawing: “Besides sharpening my drawing skills, I have been taught how to publicise and market my work,” he notes.

That someone he hardly knew went out of his way to ensure his dream comes true, is a humbling gesture that has persuaded Fleming to give back to society: “Every picture I draw has a message to the society,” says Fleming, who through the help of his teachers, has also learnt to brand himself.

“I am able to get jobs and make money to support myself. I also help other artists who have a heavy workload or backlog for a commission fee. My career is surely taking shape because of the skills earned at Miss Koch,” he says.

Fleming advises the youth to stay disciplined and maintain patience their talent notwithstanding, “because every talent must be nurtured and that requires time”. His parting shot: “ Be disciplined, chase your dream and never give up.”

Careers of youngsters from Korogocho are truly being transformed – thanks to the partnership of KCDF, which has been funding the Miss Koch Talent and Arts Entrepreneurship programme.

“The KCDF support has additionally built our internal capacity. We have improved on reporting and our financial systems. The support also took us through an organization assessment. We now know where we are and what we need to improve on as an organization. The partnership has made us better because we are not where we used to be,” sums up Lugaye.

And efforts of Miss Koch are evident in the positive attitude among the graduates: “We ensure the mind-set of our graduates is changed by the time they are done with their training. Most of them join without belief that their talents can put food on the table. But by the time they are leaving, we see a big change and they never let any positive opportunity of making money pass them.”

In a way therefore, the breakthrough highlighted in the Beauty and the Beast film where the village beauty eventually secures her father’s release from the beastly creature, has similarly been experienced by Miss Koch. “She” has charmed “her” way into the heart of the people of Korogocho and the narrative of the ugly and frightful slum continues to evidently change.