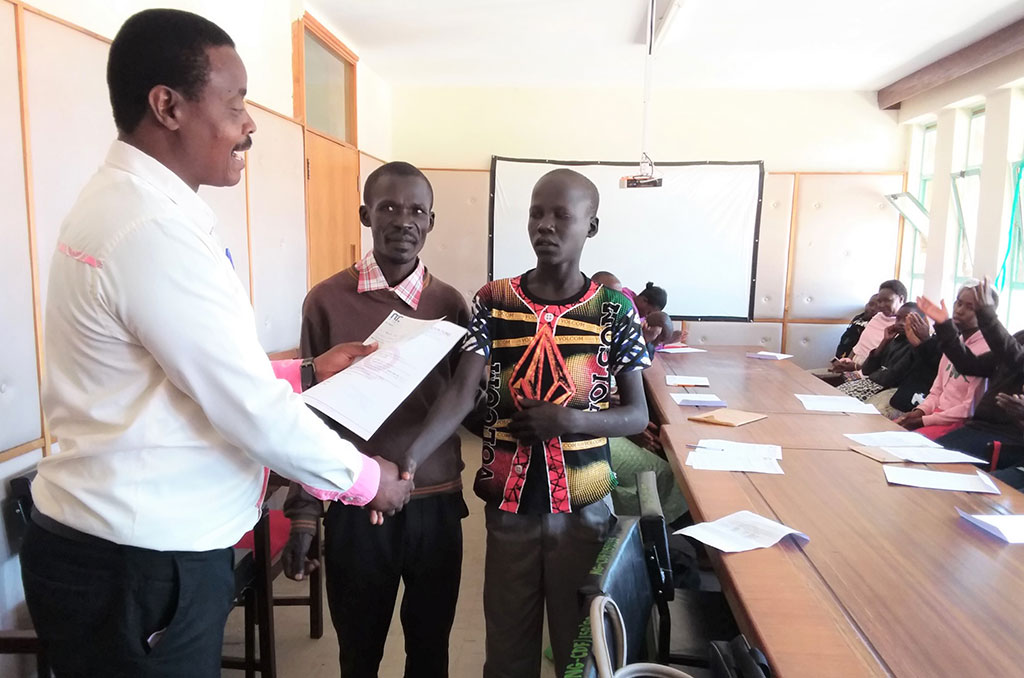 “Your organization opened a bright light of success, determination, perseverance and withstand to my life. You saved my future which was going astray because of poverty that had struck our home for a number of years. Furthermore, it makes them believe that they are able to make it in spite of their situation.”  Samuel Kimngenich, a beneficiary of “A Small Act Jamii” initiative.

It all started back in 1970’s when Ms. Hilde a simple elementary school teacher in Sweden, through an act of kindness, supported the education of a poor Kenyan boy, Chris Buru, who was growing up in a small village in Githunguri. Years later, inspired by Ms. Hilde’s generosity, Chris decided to give back to the community by providing bright and needy Kenyan children from his village with scholarship education opportunities. Chris is currently the Head of the Anti-Discrimination section of the UN Human Rights Agency in Geneva, Switzerland.

Hilde Back Education Fund was officially chartered in 2001. They are a Kenyan charity promoting access to secondary school education by offering scholarships to bright needy children in Kenya. They initially started by supporting children from the Githunguri area where Chris came from, but there was a growing need to support other needy children from other communities.

The sponsorship intake takes place annually just before the first term of the academic year begins. During recruitment, they invite a religious leader, a county representative and the child’s parent or guardian for an interview process.

The Kenya Certificate of Primary Education (KCPE) examination cut off mark is 380 marks. Once the student is successful with the interview process, they are either given a full scholarship or a partial sponsorship, to the government secondary school that they have been admitted to, depending on availability of funds. This year, “A Small Act Jamii” initiative is sponsoring two students through their secondary school education.

Hilde Back having participated in the local fundraising training course offered by Change the Game Academy, their perspective on foreign donor dependence and sustainability has shifted. They learnt tangible skills in coming up with various ways to raise funds to support the education fund and the needy children as well. This is how “A Small Act Jamii “was born.

“A Small Act Jamii” was coined from the Emmy award documentary that focused on the story of Ms. Hilde Back and Chris Mburu. This documentary opened many doors for us, and we were able to receive funding that helped us to support children from less privileged backgrounds into secondary education” Sara Njuru, the Executive Director explains.  For more information about the documentary and to view it visit: http://www.asmallact.com

The launch of the initiative took place on October 3rd, 2018 in honor of Ms. Hilde Back’s 96th birthday.  The Foundation held their first dinner and its main purpose was to bring together various stakeholders who included current beneficiaries, guardians, past beneficiaries, friends and partners.

So how did they plan the event? They held consultative meetings and listed various ideas which they shared with the Board. They then shared out the roles and communicated to all the proposed guests.

“Through the initiative, we have been able to sponsor two students and mentor nine bright needy children starting in January 2019. The education sponsorship runs for four years. Organizing the launch was a task in itself but drawing from the skills we learnt from the LFR course, we were able to succeed and raise Kes. 133,000 ($!33) which went directly to two students”

It is important for the students going through the scholarships to perform well. During the scholarship period, Sarah and her team ensure that they carry out monitoring visits at least three times a year to know how the students are faring on. Most of them usually have a hard time transitioning from primary school to secondary. This is where the life skills sessions and encouragement from her team comes in. They also equip the students with ways of managing stress, anxiety and concentration.

“Another way we source for funds is that we reach out to parents and the community at large through official letters and bulk SMS and encourage them to contribute a small amount to help support the fund.” Sarah expounds.

Over the years, Hilde Back Foundation has formed a huge alumnae network that supports and gives back to the foundation. This network of supporters and individual givers contribute as little as Kes. 600 ($6) a year to help keep a student in school.

For now, the foundation sponsors secondary education, after which the students are provided with a recommendation letter that will help them get into university. If they are lucky enough, a sponsor might agree to continue sponsoring the child through university but on an individual level and not under obligation by the foundation.

Sarah plans to hold the “A Small Act Jamii” dinner annually so as to raise more funds. “When you educate a child, they become a community child, our biggest learning from the fundraising activity was that there is huge potential in local fundraising as it leads to ownership among the community.”